A different train of thought .

That's impressive you have that loco in for the gala. And a shame most were rebuilt and had that distinctive looking exterior removed.

I must have missed you during my visit. To be fair, it was a lying visit, but I managed to get this photo: 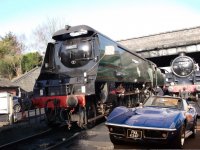 CaptainK said:
That's impressive you have that loco in for the gala. And a shame most were rebuilt and had that distinctive looking exterior removed.

I must have missed you during my visit. To be fair, it was a lying visit, but I managed to get this photo:
View attachment 15183
Click to expand...

I was only inside the workshops just behind the loco , if I had known I would have come out and said hello ! The sight of your Vette certainly caught the eye of the guy in background who was using a hose pipe to wash out the locos ashpan .

Yeah, he was quite impressed I must say.

CaptainK said:
Yeah, he was quite impressed I must say.
Click to expand...

Parked where it was right opposite the coal store you were lucky some over zealous young staff member didn`t get the front loader and dump a couple of tons of coal in your cockpit !

In my post on the 8th January I mentioned the Walschaert Valve gear as fitted to Sir Lamiel` , so as the 21st January was the 202nd anniversary of the birth of Egide Walschaert I thought it appropriate to go into a bit more detail . Egide Walschaert was a Belgian Railway mechanical engineer who invented this valve gear in 1844 which was a vast improvement on other systems used at the time . So successful was his design that it was employed extensively throughout the late 19th century all over the world and continued right up to the last UK steam loco built in 1960 .Some success story I think you will agree !!
As the valve gear was totally stripped off Sir Lamiel before I started this thread I have attached a close up of the loco whilst still in service showing the external valve gear . Basically a steam engine is fully reversible and will perform equally well in either forward or reverse gear . Direction of propulsion is dependent on what side of the pistons the steam is admitted into the cylinders first by altering the position of the piston valves in the valve chest . This is controlled by the driver from the cab with what is generally known a `screw reverser ` , in this case the red wheel shown in the stripped down cab . Winding this wheel clockwise or anti clockwise will take the valves from full forward gear , through increments of settings called percentage `cut off ` , into mid gear ( ie : Neutral ) and back through % cut offs to full back gear ( reverse ) .
Percentage cut off is the duration the pistons have along the cylinder bores with inlet valve ports open to supply full steam pressure . This ranges from 85 % full forward gear in approx 10% increments to 0% in mid gear through to 85 % full back gear . This gives maximum power when getting away from a standing start or hauling a heavy train up a steep gradient but consumes a vast amount of steam and hence water and coal . Once on the move and the loco gathers momentum the driver will `notch up ` as it is generally known by increments thus using the expansive qualities of superheated steam in the cylinders to drive the pistons . At speed the momentum may be sufficient to be able to run at only 15% cut off thus giving a huge saving in steam / water / coal . Anything less than about 15% can cause the loco to `hunt ` in much the same way an internal combustion engine does .
The piston valves operate via a derived motion from an accentric crank , eccentric rod , expansion link and a radius rod . All of which are connected to the main driving wheel which in turn is connected to the leading and trailing driving wheels via coupling rods .
Next installment will cover the all important valve and piston lubrication system which has an unlikely connection with the USA Mo 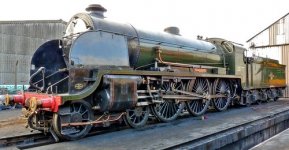 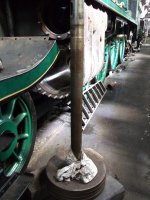 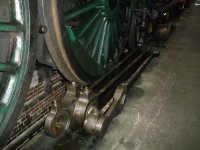 Thank you for all of this ! It's wonderful to see all the detail.
We've travelled on the Severn Valley Railway and the Dartmouth Steam Railway in the past year - always such a thrill.

Backseatdriver said:
Thank you for all of this ! It's wonderful to see all the detail.
We've travelled on the Severn Valley Railway and the Dartmouth Steam Railway in the past year - always such a thrill.
Click to expand...

Thanks Backseat , glad you are enjoying the waffle . The Severn Valley was where I really learned properly the noble art of firing and driving , plus maintenance and restoration work too , all 31 years of it ! All though my early experiences go right back to 1969 with this little tanky . 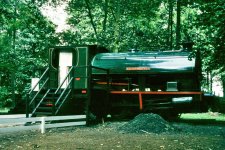 Thought I'd resurrect this thread to see if there were any updates on the steam front.

I've recently found my parents old camcorder and been digging through tapes and recording to PC. Some quality family gems there, but not relevant to this topic. What is relevant though is "The Lancashire Fusilier" black steam engine visiting Penzance on what the camcorder says is 25/03/2007 (date on tape could be wrong). Anything to do with you Chuffers? It also has a red and yellow-nosed diesel at the opposite end, but I can't make out the name on it.

CaptainK said:
Thought I'd resurrect this thread to see if there were any updates on the steam front.

I've recently found my parents old camcorder and been digging through tapes and recording to PC. Some quality family gems there, but not relevant to this topic. What is relevant though is "The Lancashire Fusilier" black steam engine visiting Penzance on what the camcorder says is 25/03/2007 (date on tape could be wrong). Anything to do with you Chuffers? It also has a red and yellow-nosed diesel at the opposite end, but I can't make out the name on it.
Click to expand...

Hi CaptainK , that loco would be Stanier `Black Five` number 45407 running with `Lancashire Fusilier` name plates which was actually a Royal Scot class loco numbered 46119 which never survived the scrap man . 45407 is owned by Ian Riley who has his own steam locomotive engineering company and owns several steam locos plus about six Class 37 diesels which are often used at the rear of the train should assissistance be required and for hauling the carriages off the steam loco in stations where there are no run round facilities like there was in the old steam days . He often runs 45407 with different name plates on . I have met him severeal times and was on Black 5 number 45110 when we paired up with his loco on a run from Crewe to Glasgow and and return in 2000 . He was running his loco as 45157 `Glasgow Highlander` at that time which had been 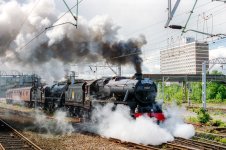 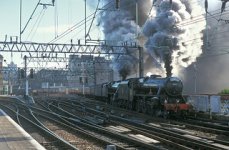 scrapped in 1962 . Here we are leaving Crewe northbound and Glasgow southbound . I have not done any updates on the overhauls recently because it is all boring stuff at the moment like needle gunning , linishing and priming and undercoating bare metal surfaces . It would make for dull reading and photos for sure . But look out for some steamy stories coming up soon !

Had another busy day in `The Big Toy Box ` yesterday so here is an update on progress on `Sir Lamiels ` rebuild . Doesn`t he look pretty in pink ?
Approximately 3/4 `s of the internal faces of the frames have been needled gunned and linished down to clean steel then painted with a coat of zinc phosphate primer to give rust protection . The first of two coats of pink primer has been applied on top of that and will receive a coat of ` Frame Red ` to give a hard gloss finish in due course . Yesterday we commenced needle gunning the remaining forward section of the frames and got a quick coat of primer on the bare steel to prevent surface oxydation whilst we concentrate on other jobs . 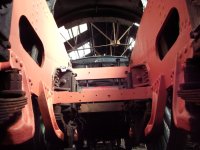 Other jobs that have progressed is the dismantling of the vaccum operated brake gear on the tender and also the hand wheel and worm gear mechanism of the hand brake . These are heavy components that have been de greased , needle gunned and linished , bushes and pivot points inspected for wear and repair as neccessary . Then painted with zinc phosphate primer and two coats of black undercoat ready for a gloss black top coat . The very heavy `way shafts` and their support brackets together with the tenders leading left and right hand footplate access steps have been similarly treated . The massive Davies & Metcalf vacuum cylinder has also been removed from between the tender frames and been thoroughly prepared and been primed and undercoated . The brake rigging which comprises longitudinal link rods , equalizing cross beams and screw adjuster mechanism for taking up slack as the brake blocks wear , have also been painted . The `fall plate ` as it is known has also been removed from the loco cab footplate now the engine and tender have been disconnected and linished and repainted . The purpose of this hinged heavy steel plate is to cover the gap between the cab floor and the short area of the tender footplate floor but can move up and down to compensate for the escillation between engine and tender as the locomotive travels along the track . I will do a bit of a tutorial on how the vacuum brake system works later . 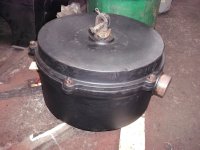 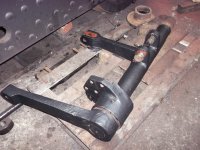 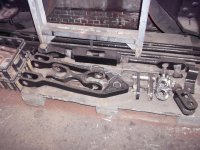 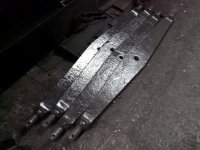 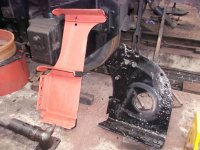 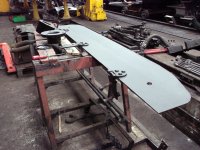 Everything is so big and heavy, at least it’s keeping you fit.

Is the needle gun treatment a relatively recent 'innovation'?

Nassau65 said:
Everything is so big and heavy, at least it’s keeping you fit.

They have been around for years , I was using compressed air needle guns well over 20 years ago . Still got the RSI and impaired hearing to prove it .

Back in January I made reference to the `Screw Reverser ` and how it is used to control the setting of the Walschaert Valve Gear . Here is a view of it on the drivers side of the cab during the strip down of all the cab fittings and lubrication pipework . This has now been removed and stripped down to its component parts . As can be seen , it works through a very course `flat thread` and the `nut ` which would attached to the valve gear actuating rod that runs from the cab along the side of the boiler to the piston valves . The nut has a `double start ` internal thread that is badly worn allowing too much fore and aft play which caused an anying banging of the `screw reverser ` when the loco was in motion . A new `double start ` internal thread needs to be machined which hopefully can be done `in house` to save cost and there is much head scratching by the machine shop guys on how it can be be done and if the lathes available are large enough for the job . If not it will have be a farmed out as a contract job and probably done on a CNC machine which will be pricey . 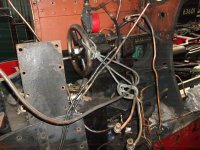 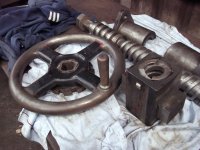