Military veterans to the rescue

Two military veterans sprang into action early Sunday morning after a Miami Beach police officer was struck on his ATV by a red C7 Corvette coupe.

Former U.S. Army soldiers Michael Lane and David Kelley witnessed the 4:30 a.m. crash on the corner of 9th Street and Washington Avenue and quickly came to the aid of the officer.

“He was dazed and confused, so I had him sit down and just tried to address the situation from there,” Kelley said.
“You hear the noise, and you see it happen, and instinct just kind of takes over. You’re not really thinking.

You just go over there and try to help someone out.”
A photo from the scene shows the ATV and the Corvette its front end badly damaged sitting nose to nose, as well as the injured officer, the top of his head wrapped by a bandage, being helped out of an ambulance by another police officer and paramedic. 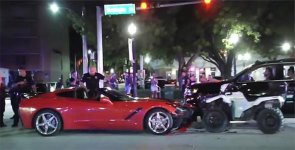 “Next thing I know, the Corvette stopped, and I heard ‘bang!’ and that’s when I realized it was an accident.
The cop rolled over the hood,” Lane told an NBC 6 South Florida reporter on the scene.

Police say the Corvette driver, 26-year-old Nash Martinize, failed to yield to the officer, who was responding to a call on his ATV.

The officer was treated at Mount Sinai Hospital for minor injuries and is expected to make a full recovery.
“He had a small laceration to the back of his head, a little blood,” Lane said. “He was able to walk to the ambulance, though.”

And another veteran, though this one is 95 years old

WNKY-TV reports that after a few phone calls & explanations that time was of the essence for the 95-year-old, he was bumped up the waiting list. 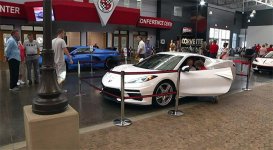 Don’t worry about the car being a garage queen, either.

Carson insists that his new mid-engine supercar won’t be sitting around collecting dust, as he plans to sell his other car and use the Corvette as his daily driver back home in Georgia!

Good to see some positive news.