Toying with a change of appearance

Having looked at my personal 1965 vert for nearly 30 years, I’m toying with the idea of changing its appearance somewhat.
I fancy a 1967 big block hood, so if anybody has one let me know.
Will possibly change the interior color from bright blue to white so I can have a white stinger on the hood to match it, and may change the soft top from black to white. Not that it ever gets put up, just for difference.
I’ve also been thinking of adding another set of tail lights aka California six tail lights fad. I must admit I’m getting to like that fad.

Just getting a bit tired of seeing the same old thing sitting about.

Pic below is of a vert done in blue, possibly in Australia now as it’s RHD.
The middle tail lights appear not to be stock items, even as back up lights. I think they are a home made item, as the back up lense has a red outer reflector ring, which factory lenses do not have. 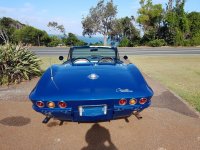 Nassau65 said:
Just getting a bit tired of seeing the same old thing sitting about.
Click to expand...

I will do you a huge favour, to save you the effort swop cars with me then you can look at something different.

I am a bit partial to blue over white ever since seeing a Consul Capri done like that in 1979.

I’ve always liked white interiors, yes, a bugger to keep clean, but in my opinion look fantastic.
On full size convertibles once the tops down, with a white interior, the car sells itself.
I’ve also always favoured white convertible tops over black. To me, they look great. Again a pig to keep clean especially as they are out/in all weather conditions if left outside.
A bit like dirty whitewall tires, when dirty they look horrible, but when they are clean they look fantastic. 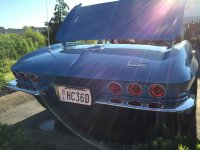