What Have You Found To Watch?

I've seen this little film before, but what a joy!

We met Bruce at Goodwood years ago, when he brought the C1 over. At that time, the "other" C1 had just beed discovered and it had been determined that Bruce's was not in fact the winning car from 1960, but one of the others in the team. But he didn't care - he was just thrilled to have it and, thrilled to show it off, particularly to us as Corvette people. He's a super, charming guy and a true enthusiast.

We were talking to Danny at Le Mans years ago and he said he'd had "the call" from Bruce, to come and look after his car. He had more than enough on his plate at the time, but he said "No one says no to Bruce Mayer!" Of course now, Danny has retired from the race team and his speciality is looking after almost all of the genuine Corvette Racing C5s and 6s out there. Another really nice person and a proper car guy!

I have to say, I watched the film with some regret, having just seen "the end of an era" during the Sebring 12 Hours. Danny retired earlier in the year, "DJ", No1 mechanic on the 3 car was doing his last race and of course, our own Olly Gavin has stepped away from racing with Corvette. On top of all that, the car is just not the same - I know all about the C8 and what a great car it no doubt is, but it's just not a 'real" Corvette! And that sound...Ugh! I know there are a lot of people who miss the GT1 Vettes; I really lament the passing of the front engine rear drive Vettes and the "proper" Chevy V8 - a FPC engine just does not do it for June & I. This film just makes us remember what fabulous cars the C5's 6's and 7s were, and still are. The "greatest race in the world" at our home track Le Mans will just not be the same now....

I’m sure I’ll be at Spa or Brands at some point next year if you want to hear a “proper” V8 race car.

Oneball said:
I’m sure I’ll be at Spa or Brands at some point next year if you want to hear a “proper” V8 race car.
Click to expand...

I'd very much like to see your finished Vette running! It won't be at Brands for me though. Spa? Maybe, CCF are going I think.....

Well, that looks a proper job - I'm wondering how it stays on the ground at 176 mph?

900bhp from a small block

Short but sweet from the GM press release:

Not a Corvette but still a Chevy

Can't beat Gas Monkey Garage with a side of Storage Wars Texas.
J

Talking of Texas, I was looking at some live country music on u-tube, and there's a honkey-tonk down there called The
Crossfire Club (the actual town might have been Hamilton, but I'm not sure).
At first I thought the place may have been named after our 1982-4 engines (L83), but then I saw a couple of revolvers mounted over the stage,
firing across each other......
(Acknowledge first use of the cross-fire injection was on Cadillac)
J.C. (1911)

If you got 90 minutes settle down and watch this about Willy T Ribbs, BRSCC Formula Ford champion and first African American to race in Indy 500

The Autumn Nations Rugby Union Championship . Is there anything else at this time of year ? The proper BEAUTIFUL GAME played by ugly people

And we think we have trouble starting-up

Apart from Bangers and Cash, my other favourite programme is Gold Rush.. 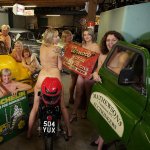 Matt Parent starts this race from the front but spins out on the second bend. He rejoins in last place...his fight back is entertaining, and helped by that engine.